If you are interested in attending our Film Screening this Saturday of the Film: Hunt For The Wilderpeople, email the foundation. Following the screening there will be a special message from the Actors..... 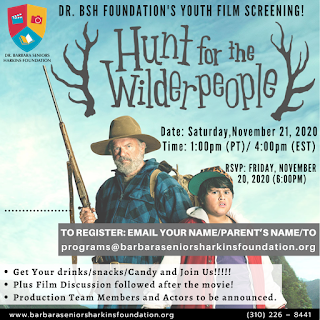 Posted by Dr. Barbara Seniors Harkins Foundation at 8:42 AM No comments:

From Film Student to Editor of You: Spotlight of one of our Speakers From Our Online-Screen Workshop

From Film Student to Editor of You 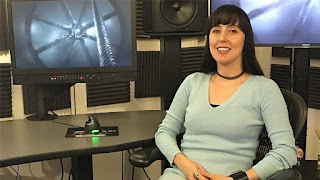 From Film Student to Editor of You

Rita Sanders, editor of the TV show You, joined one of the Barbara Senior Harkins Foundation’s film screenings last month. She came along with other film editors and directors to share their knowledge on the craft and industry with prospective film students.

After the screening Sanders spent her time to indulge me on her work with You and to give advice to film students based on her past experiences.

When discussing You, Sanders stressed how important it was to make sure Joe Goldberg, the main character, stayed true to the character he was meant to be while being considerate of others and not commending his stalking behavior. Especially since the show was released during the Harvey Weinstein allegations and the Me Too movement.

“The first season of You was all about trying to figure out in the edit how to really balance the line between not glorifying violence against women with making this character relatable enough that you wanted to keep watching,” exclaimed Sanders.

Sanders went on to explain the editing process and how it played a role in achieving this goal. “Generally we have three editors, three assistant editors and we do every third episode. There was a lot of collaboration between the editors looking at each other's cuts and talking about the problems,” explained Sanders.

Sanders and her fellow crew were concerned of displaying the wrong image, since Goldberg is a sociopath that stalks and kills women, so plenty of time was spent rewriting the voiceovers and being conscious about highlighting the women who were victimized in the show as humans and not objects.

Sanders had much to say about her work with You and the editing she had learned and performed while working on the show, but she also gave tips on editing in general. “ The best editing is the editing you don’t notice, our job is to hide the editing as much as possible,” said Sanders.

Along with knowing how to mask your editing, Sanders explained the importance of matching your editing with the storyline as to make it stronger.

While working on You, she developed this skill because with a story as wild as Joe’s, the male antagonist, comic relief is needed in the editing by cutting it tighter and adding other comic features. But when Sanders edited the episode from Beck’s, the female protagonist, point of view she was inclined to cut it more loosely and less comically, giving her and the writers more space to tell Beck’s story.

Moving on from the cutting and clipping part of the editing process, Sanders shares how she felt after the release of the first season of You.

Sanders' own work ended up surprising her when the show was all done. During the process her emotions took hold of her and blocked the bigger picture of this production. But she was able to see the beauty of her work in the end.

Sanders began as an aspiring film editor and was able to flourish into the amazing editor she is today. Beyond being able to cut a show well, Sanders made it to this point because she was not afraid of throwing herself headfirst into the film industry. She advises for anyone looking to enter this industry to not be picky with the jobs they are offered. Even if you have your mind set on being a director, if you have the chance to take an editing gig, and are properly skilled for it, then take it! This could be your breakthrough into the industry, another job on your resume, or just a great experience; either way, it’s something you won’t regret.

Since this is a Lunch Workshop, it is fine if you would like to eat your lunch. Lunch Vouchers will be provided to the first ten students that sign-up.

For More Information, please see the flyer below. 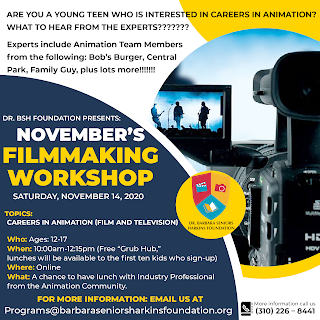 Posted by Dr. Barbara Seniors Harkins Foundation at 5:55 AM No comments: 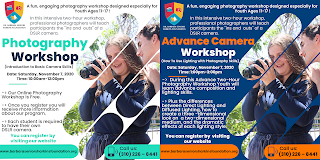 Posted by Dr. Barbara Seniors Harkins Foundation at 10:09 AM No comments: 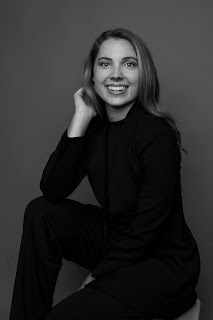 An actor, producer and helper: Monique Gelineau. Gelineau began her acting career by participating in school productions from elementary school through junior high, subsequently developing her passion of performing. However, Gelineau was torn between whether she wanted to be an actor or singer. After her freshman year at California State University Fullerton, studying in the Musical Theatre program, Gelineau was able to see acting was the passion she wanted to pursue. She began working on developing her craft by joining the Bachelor of Fine Arts for Acting program, which is an extremely selective program to get into. The lessons Gelineau learned from this program, her natural talent and love for acting equipped her to handle multiple roles and learn new stunts, as she did in the play: Metamorphoses. Gelineau played Midas’ daughter, the messenger God Iris, Hunger and Myrah, in addition to sliding down a twenty foot fireman pole, disappearing into a pool of water-- which had a trapdoor beneath it, and learning aerial arts. Even though the play required many aspects, ones which she probably had not practiced being that she was a college student at the time, Gelineau kept a positive attitude, enjoying every moment and seizing the lessons from this opportunity. “Physically, emotionally, and creatively it was an incredible experience that really challenged me in the best ways possible,” exclaimed Gelineau. 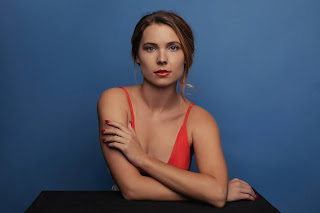 Besides being a talented actor on the rise, Gelineau has also dipped her feet into producing. Gelineau foresaw the benefits of this field leading her to gladly take up this position. “Creating your own work is the very best way to keep working, meeting new people and having something to talk about when meeting industry professionals,” Gelineau stated. Gelineau was able to prosper while holding multiple roles by creating a system: “ I try to keep my life very organized, and thrive with Google Spreadsheets.” In addition to leading an organized life, Gelineau is able to connect talented and devoted people in front, and behind, the camera with producing. She aspires for acting and producing to be her only jobs. As of now, acting and producing takes up much of her day, but Gelineau still works as a TV production assistant for Notre Dame High School.

Even with her numerous acting and producing roles Gelineau devotes her free time to contributing her knowledge, on the media industry, with the young actors, directors, and producers of the Barbara Senior Harkins Foundation. She first heard about the foundation through our very own, Elisia Harkins-James while working as a TV production assistant. Gelineau loved working with Harkins-James and saw how the foundation truly benefited others. “She’s just someone you always want to work with; incredibly smart, talented, kind, and supportive, and I love how well she is able to reach out to students across the nation and the world,” exclaimed Gelineau. She officially began her work with the foundation in 2019, working as a guest speaker for workshops about producing, in addition to assisting in the live webinars. Gelineau plans to continue working with the foundation, viewing it as an honor, and is dedicated to partaking in any form the foundation needs. Her persistent work with the foundation has caused her to gain many fond memories, her favorite being a virtual producing seminar she spoke at. “During the summer, and during a pandemic, young filmmakers signed up and showed up to further their knowledge and careers! That kind of passion and dedication from the young generation of filmmakers coming in is truly inspiring,” stated Gelineau.

Beyond gaining memories that will stick with her for a lifetime, Gelineau also was able to witness how her work and the work of the program has benefited young film students. “These participants really feel connected to the world of this industry, fueling their fire, and making their filmmaking dreams seem all that much more attainable,” expressed Gelineau. Subsequently, Gelineau also witnessed her own development in terms of her communication skills and source of creativity. “I am able to hop on virtual calls with other filmmaker guest speakers and learn from them as well, in addition to the inspiration I feel from the young filmmakers who participate in the foundation,” said Gelineau.

Monique Gelineau is a gifted and accomplished actor and producer, and through her work with the Barbara Senior Harkins Foundation, Gelineau has become a talented teacher and mentor to many young film students. Her time spent in the foundation has and continues to be appreciated. I’m sure the film/media industry appreciates her part in developing the future directors, producers, and screenwriters of the entertainment we will be enjoying. 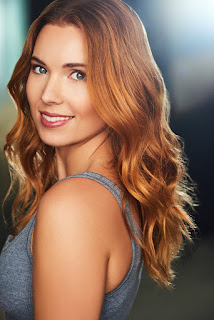 Posted by Dr. Barbara Seniors Harkins Foundation at 12:27 AM No comments:

Film Screening Volunteers: Thank you and Congratulations To Our Film Trivia Winners!!!!! 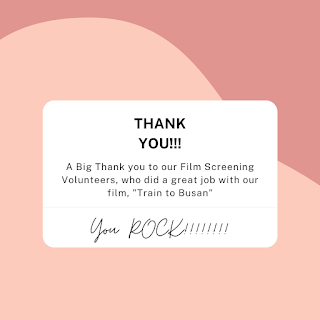 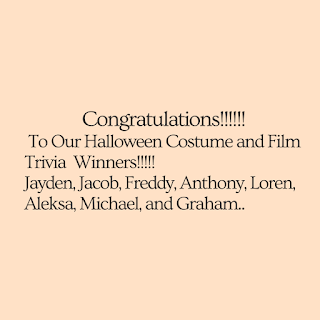 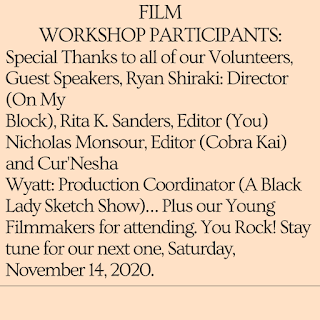